Pennsylvania’s Most Wanted: The Springtime Pests at the Top of Our List 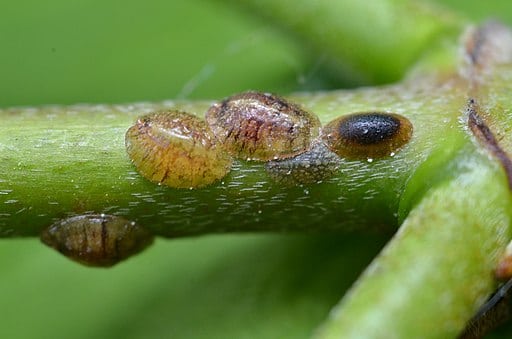 They’re coming. Pests threatening your landscape this spring could very well affect the health and beauty of your trees and shrubs. Spring is the typical time when insects begin to emerge from inactivity and fungi begin to spread with the increased moisture and warmer temperatures. It’s critical that homeowners are aware of troublesome symptoms that could be developing – discolored leaves, premature leaf drop, dead branches and a thinning canopy.

We have compiled a list of our most problematic pests, which might affect trees and shrubs across the Central Pennsylvania region this spring. Along with this information and regular inspections, you can catch problems early for the most effective treatment.

#5 Most Wanted: The Hemlock Wooly Adelgid

This Asian transplant is having devastating results on our forests and landscapes. It is one of the most commonly encountered insects by our arborists and can cause the death of the tree if left untreated. Since there are no native predators for this insect, it has spread unchecked throughout our landscapes and is threatening the native stands of Hemlock throughout the American northeast. The adelgid itself is a small black insect that attaches to the under- side of hemlock twigs, where it remains and feeds. As the insects develop, they secrete the characteristic white wax that gives the bug its name. A mature infestation of adelgid looks like small cotton balls have been pasted to the underside of the twigs. Fortunately, this insect has proven to be easy to control, and we have had success in reviving trees with significant damage and heavy infestations.

A devastating fungus that is affecting a number of deciduous shade and flowering trees. The most serious Anthracnose disease is Dogwood Anthracnose that affects the common flowering dogwood and can be lethal. Dogwood Anthracnose begins as spotting of the foliage in the late spring and summer. The fungus can then move from the leaves into the twigs and eventually into branches. Once the fungus enters larger branches it forms structures called cankers that will enlarge from year to year, eventually girdling and killing the entire branch. Sycamore Anthracnose and Ash Anthracnose are two others that have caused many problems in our region in recent years.

This Group is one of the most notoriously difficult pests in the books. Most trees and shrubs are susceptible to attack from some sort of scale insect. The most common and noticeable scale is the azalea bark scale. This insect appears as a white fuzzy object on the lower stems of azalea plants, somewhat resembling popcorn. This scale is extremely difficult to control as the white waxy covering over the insect prevents insecticides from coming into contact with the insect. We have had excellent success in managing this insect with modern techniques. Another very common scale is the European Elm Scale. In spring, as the temperatures warm, the females feed on branch sap, which results in noticeable honeydew deposits. Young yellowish-green crawlers emerge in late June into July migrating onto leaves to feed. This feeding causes premature yellowing and shedding of leaves. The leaves that fall will be very sticky from honeydew. A black sooty mold will form on twigs and branches – branches may be killed by heavy scale populations.

The overwhelming popularity of crabapples has made this disease one that we encounter regularly. This is a fungal disease that causes spots to form on the leaves of crabapples starting in the spring. The spots enlarge as the season progresses and the leaves begin to drop by mid-summer. Often by August, a highly susceptible tree will be almost completely defoliated. In addition, the fruit is affected which will disrupt the fruit display that normally graces a disease free tree in the fall. The disruption of photosynthetic leaf area and premature defoliation of the tree on a yearly basis will reduce the amount of photosynthesis that occurs and result in a weakened tree.

Several fungi make up this sneaky disease, which hides it’s visible symptoms until the late winter, spring, and early summer of the year following infection. Late spring and early summer is the period of greatest infection for most needlecast fungi. Infected evergreens will be distressed with such things as needle loss and dead branches. All types of needlecast fungi form small structures on the infected needle in which thousands of spores form. These “fruiting structures” may be black, orange-red, or tan, depending upon the fungus. Fungicides can be applied to protect healthy, new foliage. Even if a tree is sprayed, the needles that were infected during the previous year and that are showing symptoms this year will fall off the branch. But the new, protected needles will be free of symptoms next year and will remain on the tree.

If you see the symptoms of one nefarious characters, reach out to us. Good’s Targeted Pest Treatments will put them on lockdown. Our experts make an informed decision on how to address your pest situation. Our method minimizes the overuse of pesticides by target applications only where needed. We use effective products and beneficial insect release to ensure a solution worthy of your healthy, natural landscape.