Fall is Coming and So are These Pests 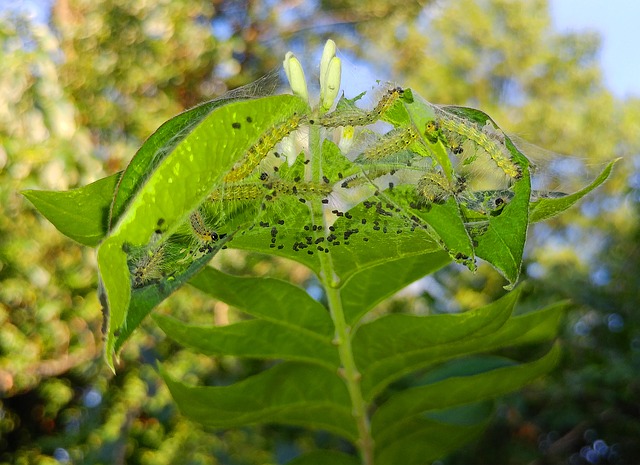 As the long hot summer finally comes to an end, folks often think their battle with pests is as well. While certain pest populations do diminish with cooler weather, the fact is that many continue to thrive. So, as you are enjoying the change in seasons and gearing up for football games and fall festivals, Goods Tree Care wants to share with you the top pests we expect to see this fall.

The fall webworm is a widely distributed native pest of shade trees and shrubs and appears from late summer through early fall. It feeds on nearly ninety species of deciduous trees commonly attacking hickory, walnut, birch, cherry, and crabapple. This species acts similarly to the eastern tent caterpillar, but the fall webworm constructs its nest over the end of the branch rather than at tree crotches. The large conspicuous webs contain caterpillars, dead partially eaten leaves, and fecal droppings. Worms feast inside webbing, increasing the nest size as they grow. It’s unusual for worm feeding to defoliate a tree, but it can occur with a young or small tree.

This Asian transplant is having devastating results on our forests and landscapes. It is one of the most commonly encountered insects by our arborists and can cause the death of the tree if left untreated. Since there are no native predators for this insect, it has spread unchecked throughout our landscapes and is threatening the native stands of Hemlock throughout the American northeast. The adelgid itself is a small black insect that attaches to the underside of hemlock twigs, where it remains and feeds. As the insects develop, they secrete the characteristic white wax that gives the bug its name. A mature infestation of adelgid looks like small cotton balls have been pasted to the underside of the twigs. Fortunately, this insect has proven to be easy to control, and we have had success in reviving trees with significant damage and heavy infestations.

The obscure scale is a significant pest of oak, in Pennsylvania. This armored scale insect attacks a wide variety of other woody host plants such as beech, dogwood, hickory, maple, and willow. They remove plant fluid from twigs and branches with piercing-sucking mouthparts, causing infested host plants to drop leaves prematurely and dieback. Numerous sunken areas appear on the bark where this pest has been feeding, producing a roughened appearance. Infested branches appear to be sprinkled with wood ashes or small pieces of silver glitter.

The oak leaf itch mite, thought to have originated in Europe, has been recorded from Australia, India, Egypt, Chile and most recently, the United States. Oakleaf gall mites are not generally a serious threat to trees but they can become a nuisance to humans when their food source becomes scarce. Their bite leaves a tiny welt-like itchy bump that inflames the skin.

The key to not having unwanted guests is to do some late summer landscape and tree inspection right about now. If you see the symptoms of one of these fall pests, reach out to us. Good’s Targeted Pest Treatments will have them gone before the first frost. Our experts make an informed decision on how to address your pest situation. Our method minimizes the overuse of pesticides by target applications only where needed. We use effective products and beneficial insect release to ensure a solution worthy of your healthy, natural landscape.